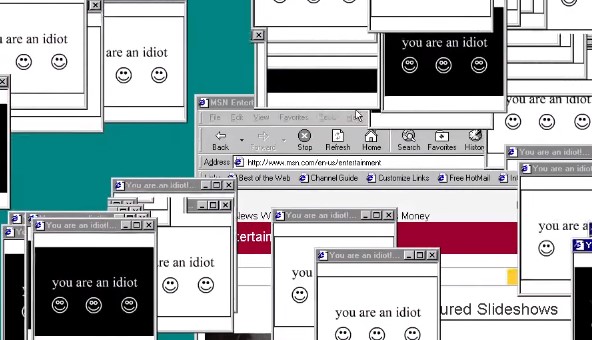 Do you consider yourself a Prankster? If you are, then you will definitely enjoy knowing about Joke Programs.

They are harmless… But still, the result quite annoying to some. It depends on the one you send it to.

Or, go beyond, to the next level, and genuinely scare your friends or family members with a joke program that acts like a malware infection (from endless pops-up to error signs that suggest all your data has been erased).

The possibilities are endless… What do you prefer?

Take your time to choose while you see the Top 10 Joke Programs of all-time, available on the internet.

This is an emulated upgrade as the Windows Update screen. A tab will open asking to “Install” or “Cancel” button. If the innocent victims accept to install, it starts the “upgrade Advisor” scan that actually doesn’t scan…Being impossible to stop the fake progress (not even closing it).

Here’s the best part. After 15 seconds loading, the system actually shows a MAC OS X interface all over your screen!

It can be canceled by Double-clicking the screen or through with 5 consecutive clicks.

The mecca of entertainment… Seeing someone try something impossible. Think about it: a button that avoids the victim’s mouse.

Especially funny for its “Click Me” text over it, it is the perfect desperation provoker.

It can be closed by pressing Enter or ESC key.

Similar t the previous one, the “crazy mouse” it appears as being possessed, moving randomly, or to specific directions… But all, without your consent.

There are different options to choose from on a minimalist panel. You can set-up the direction, movement speed, and the time delay. See as your friend gets completely mad.

Want to stop the program? Move the pointer to the top left on the screen. When placed correctly, it will show the close box.

This one includes 2 different Joke Programs that focus on having fun with the Window’s start.

First of all, there’s ClickStart that runs in the background, clicking the “Start” Windows button every certain period of time (default is 45 seconds) and opening against the victim’s will.

The other one is eviler. It completely avoids the Windows “Start” button when you try to click it. Just run the software, and watch the jump-away madness… Both can be closed down by moving your cursor to the top left of the screen.

Imagine having the power to flip the computer screen all over the place, to all kinds of positions… Well, you can now.  Flip or reverse it, even the victim’s mouse shows a “?” sign to support the confusion.

If things get too crazy, you can press any key to close it down.

The name itself is scary (Virus.exe) but the effect is quite hilarious. Remember the TROLOLOLO meme from early 2010?

This is one of the things we got left from it.

Just double-click to activate the musical pop-ups (be aware that it disables both the Windows Explorer and the Task Manager, so good luck trying to close it down with it).

How would your friend react if he/she finds out that all their computer programs were “removed” in an instant? Want to find out?

This doesn’t truly happen, but it looks as it does. It displays all of the software you have genuinely installed, so you don’t know how to act when the only option available is OK when asks you to Remove it all.

There’s one similar for the Recycle Bin. It basically pretends to delete all your folders and files inside of them, with realistic text, and unstoppable mechanics.

Both Fake Delete pranks can be closed down after they have “deleted” everything.

Remember this little guy? Yeah… He’s back. And he looks and hears exactly as the original one (it even shares useless information that no-one even did).

For the purpose of this joke, you can leave the default funny messages or add your custom ones. This is probably the most in-depth joke program from this list, and it can be closed down by moving the cursor to the top left of the screen (an X should appear if done correctly).

If you have been a Windows user for a long time, you probably have seen at least once, or knows about someone that it happened to.

This terrifying screen is fortunately fake, but its creators make a terrific job at disguising its fakeness. Just press a key or ALT+Enter to close down the blue screen of death simulation.

I’m not going to lie. This is the scariest from the top.

You could judge by its name that it would harm your devices, but it actually doesn’t. At least not the standard version (someone might have taken advantage of its popularity, modified its code, and shared publicly for malicious intentions).

Have you enjoyed these joke programs? Want more geeky ideas? Then check this list of 10 harmless computer pranks to continue laughing at/with your beloved ones.

Remember, they are intended to exist and be shared as a prank and no other than that.

Joke Programs shouldn’t damage your friend’s or family’s devices. And they do not propagate as malware either (except from the last one, you would probably differentiate them between malware).

Although, this is not the case for two in particular well-known today:

Winfastener (a trojan disguised as a joke program that shows a spooky message, and filters into your computer when “OK” is clicked) and Lose/Lose (a macOS X retro game quite similar to Galaga, that it deletes an important file of your computer for every enemy killed).

In such a case, we can assist you right away with this IT emergency.

But overall… Be aware of what you search and download on the Internet.